What is status of Luis Robert?

He is no longer mostly dead.  At this moment, he is Wesley pretending to be fully healthy and demanding that Prince Humperdinck throw down his sword(before he falls over) 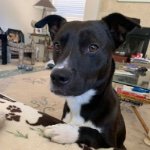 He wears a live rattlesnake as a condom