I predict the Usos don’t win 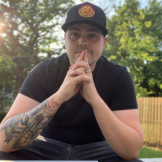 Smackdown isn't perfect by any means, but there's some really good wrestling happening on that show right now. We didn't even have AJ or Shinsuke wrestle on TV tonight and we got two really strong 20+

Takeover was great per usual.  Didn’t think it was their best show but that’s just because everyone is always amazing. I’m pretty stoked for tonight.  We’re staying at the same hotel as the wrest