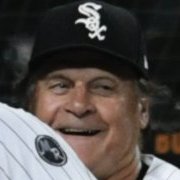 You know what we deserve as a fanbase? A nice no drama white sox blowout of the As in the first few innings and then coast.